Back Where He Belongs, Miller Wins His Third PPO Title 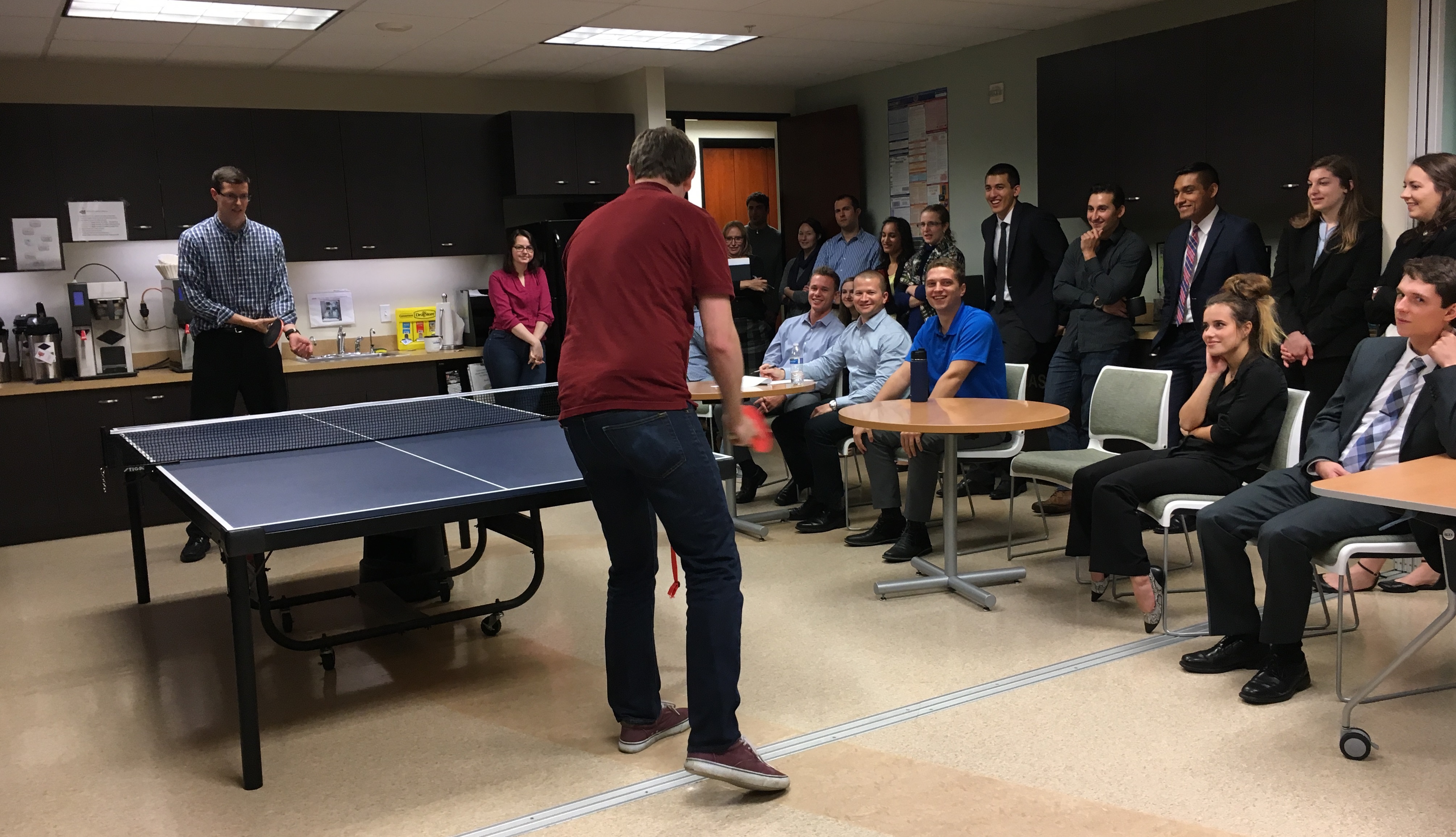 LAKE OSWEGO – Did you really expect the outcome to be any different?

I mean, sometimes Goliath does beat David, and sometimes the favorite just takes out the underdog.

Yes, heavily favored Benjamin "The Killer" Miller cruised through the competition, winning all of his matches – and sets, for that matter – en route to claiming the title at the recent fifth-annual Delap Ping Pong Open Championship.

In the final, Miller took down Christian "Thunder" Roderick, 2-0 – by scores of 11-4 and 11-9 – giving the tax senior his unprecedented third overall Delap PPO crown.

Oh, and did we mention Miller has been to all four finals in his four years since joining Delap in the fall of 2012?

I mean, we might as well call the award for winning it all, "The Benjamin Miller Delap PPO Trophy."

"I was nervous – I always am at the finals," said Miller, who lost a heart-breaker in last year's championship to Cameron "Big Tuna" Ferguson, 2-1. "But I was a little more confident than in prior years."

While making his initial appearance in the final, Roderick, an assurance manager, set up the first assurance versus tax championship showdown since 2014.

But the first-ever meeting between Miller and Roderick did not go as hoped for Roderick.

"Just frustrating," said a disappointed Roderick, who hails from Oklahoma, home to the NBA's Oklahoma City Thunder. "I know I didn't perform to my full potential. Sad to have to go out so easily. Would like to have at least put up a fight."

In typical Miller fashion, he remained calm throughout the title bout, despite a showdown in front of a nearly standing-room-only crowd, including a host of campus recruits, inside the Delap training room.
Miller seemed at ease while scoring the match's initial six points before Roderick knew what hit him.

"I tried to stay calm and focused," Miller said. "I also took some bigger risks in the first set – forehand 'kills' – which paid off and tried to keep Christian guessing with spins, speed, and direction."
To Roderick's credit, he found himself in a 9-5 hole in set No. 2, before reeling off four straight points to knot it up at 9-9.

Just when it looked like the game was headed for a do-or-die third set, however, Roderick hit a shot wide of the table, and then the ball bounced off his knuckle.
Game, set, match – in a breezy eight minutes.

"Can't believe that I lost off the finger on the final point," Roderick said.

This year's version of the tournament featured 20 total players spread out across four five-player pools, named for – surprise – the beloved Blazers, Timbers, Ducks, and Beavers.

While the 2015 champion, Ferguson, was not back this year to defend his crown, the competition still featured some solid ping pong action, starting with pool play and followed by single-elimination bracket play, leading up to the Miller-Roderick showdown.

Roderick took first place in the "Ducks" pool and lost just one set throughout the tournament – that is, until he ran into the Goliath-tall Miller.

"He looks really good when he plays – like he's putting on 'The Benjamin Show'," Roderick said of Miller, winner of the "Timbers" pool. "Benjamin's a baller, and I want a rematch."

Ironically, Roderick did get that chance – and he took down Miller in a single game to 21 points a few days following the tournament.

Unfortunately, though, that didn't count in the "official" ledger, meaning any possible Roderick revenge will have to actually wait until next year.

"God gets all the credit for the win," Miller said. "To quote coach Grant Taylor from the movie 'Facing The Giants', 'If we win, we praise Him, and if we lose, we praise him.'"